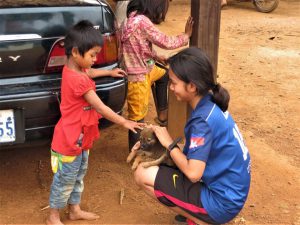 It almost got me, but it failed. From a few little red spots, it formed a round shape and slowly turned into blisters. They were everywhere on my body — five spots to be exact. Those were ring worms. I unexpectedly got infected by dogs. My life was in a hot mess after I got back from my project’s mission at Mondulkiri, under an intention of diminishing human and animals’ cause of death from rabies by providing free rabies vaccines. Another mission appeared to be a few weeks after the previous mission. I would admit that I was not ready for it since my infection had not recovered: I was frustrated. I even asked to not touch anymore animals due to my concern about ring worms. On the actual mission day, my only main role was to raise rabies awareness to villagers who brought their cats and dogs to our place. But, I could not  help by just staring at my teammates doing the work, so I jumped in anyway and started helping with the vaccinations.

Being able to support and be the reasons for other people’s enhancement is my elation. The helping process itself can be frustrated, exhausted, uncomfortable and sometimes could be harmful, but it is worth it. We born on the same planet, but not with the same identity. Some people already had so much while some others are still struggling to find paths for a proper life condition. Building up motivations for others is like bringing smiles and hopes. We help by providing supports for others to get a better quality of life.

Cambodia, with an approximation of 15 million people, are suffering from rabies. Based on a data that was collected by Pasteur Institute in 2009, dogs population is ⅓ of Cambodian population while roughly 800 people died from rabies every year. In a group of 10, we took these information into actions. We collaborated with two experts to host two free rabies vaccination events, Phnom Penh Animal Welfare Society (PPAWs) and Animal Rescue Cambodia (ARC). We worked with PPAWs for two days down at Mondulkiri to raise rabies awareness, provided rabies vaccines, and offered free health checkup for dogs and cats. We then organized and advertised a second free rabies vaccination event with ARC at Koh Krobey village (a village near our school). It took us the whole day for the event and we successfully injected 167 dogs and cats. Both missions were impressively successful! We can see the care from those animals’ owners. Tuk tuks, motos, cars were coming from every directions to our vaccination location. I found the experience worthwhile and that it’s doing two jobs at the same time. Both animals and human are safer from rabies.

Equally important, Camkids, an NGO down at Kampong Speu opened a primary school. Children are allowed to go to school with no payments required. Camkids guided villagers to collaborate and be the leader for their own community. Villagers are delighted with the existence of Camkids because without Camkids, their children might have to go to some far for schools in Kampong Speu or villagers might not even consider sending their children to school. During a seven-week project, I worked with a group of seven to create a well designed survey to see how Camkids has improved the communities around it since it was built. We used our knowledge from AP statistics to structure our survey. We then went down to Kampong Speu and surveyed about 103 villagers from three villages around Camkids (Chbar Chross, Trorpaing Mean,Ta Ngov) on three categories: health and nutrition, education, as well as wealth and income. Each survey took us about 30 to 45 minutes. We modeled our survey from a previous survey that was conducted when Camkids just started. We analyzed our data and displayed them in best way possible, using graphs and description. Our work will be display on Camkids’ website and could be seen by possible donors. I would be looking forward to hearing more about how my team’s data has helped with the improvement of those three villages. Currently, villagers’ access to power supplies down at villages around Camkids are still depending on batteries as well as solar. At the same time, education is also another important aspect that still need improvement. I volunteered to spend a few days during my last summer break down at Kampong Speu to work with a few Princeton students to install solar panels at the school, so students there could have extra english classes in the evening.

We all fully aware that education is necessary, but I am sure we should be both physically and mentally healthy as well. Besides learning time, I am also a frisbee player and has volunteered to dedicate my weekend time into teaching Camkids students frisbee. Many children at Camkids, never know what frisbee really is; they have never seen nor touched one before. I went there with my girls teammates for half a day to train around 60 children frisbee. They seemed to enjoy playing and learning about this new sport. We are also looking forward to pick determined players from Camkids to join our first, Cambodian women ultimate, Bee Force.

As a matter of fact that the idea of offering support is essential, putting it into action is the next step. Times were being dedicated into variety of projects with a clear intention that we want to see change, a positive one. As a 16-year-old, I found this tough, and I sometimes uncertain if this goal is too big to accomplish. But, I carried out one quote from mother Teresa, “Not all of us can do great things. But we can all do small things with great love.” Doing what we are capable of would be ideal. Being the support for others could take a lot of courage to keep going especially for someone who is a shy person like me. It is putting ourselves into being uncomfortable, but it is my pleasure to see what I have done has actually create impact. Going on field trips gave me unforgettable memories. I learned to become an empathetic person and be braver to share what I’ve got. I believe and I will keep on doing what I can and see Cambodia, my home country, grow into a better place.